Deflation is coming, are you ready?

What's up with Stonks is a biweekly report that delves into the complex and often confusing world of the stonk market. Community Manager Verneri Pulkkinen helps you navigate the troubled waters of market movements and macroeconomic phenomena. Stay tuned for the hottest investment scene news, moderate amount of stock populism and understandable information about the stock market.

Investors are currently in agony caused by inflation. Unexpected, high and long-lasting inflation is disastrous for equities, as I argued in the previous post. Eating away at markets and eroding the foundations of society, inflation has a good chance of staying high for a long time.

The latest CPI data from August just shot above expectations at 0.1%  month-on-month, versus the 0.0% estimate. However, it seems the inflation peek was back in June.

Nevertheless, in this post I am going to make the case for deflation, and why it makes sense for an investor to be prepared, at least mentally, for a slowdown in price rises in the future.

The week has started with good news: stock markets begun the week on a strong note and the Ukrainian counterattack is progressing well. 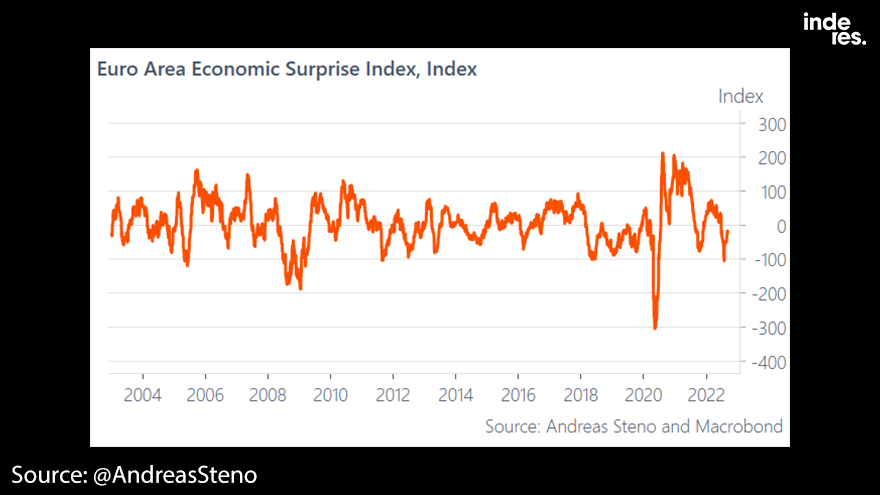 The stock market is an institution that attempts to predict the future.

What matters is not so much how things are, but how they turn out in relation to expectations. If the stock market was expecting the end of the world, stocks would be calm on the news of the apocalypse because that would already be priced in. In severe crises such as spring 2020 or the financial crisis, expectations were clearly missed.

I must point out, however, that this relates to this summer’s economic data and the market may be in a different mood during the winter. Winter always surprises motorists, perhaps this time also investors and market soothsayers and forecasters.

The economy is headed from inflation to deflation

Inflation is the word of the day, but looking further ahead, the economy has the makings of a cooling of price rises and even a general fall in prices also known as deflation. Mind you, this is not a prediction, but an attempt to highlight aspects of the market that are less pronounced in general.

It has to be said that inflation has very good reasons to stay high. Because of this, the title of this post has an excellent chance of ending up in the folder named “Embarrassing Titles” in the future. The Atlanta Fed's so-called sticky inflation rate continues to rise on an annual basis. As the name implies, it refers to inflation in goods and services whose prices tend to change slowly and is shown as an orange curve in the graph below. On a monthly basis (blue curve), the volatility is strong. Fortunately, the fast-moving underlying inflation rate is easing rapidly, but is still at a threatening 7%. 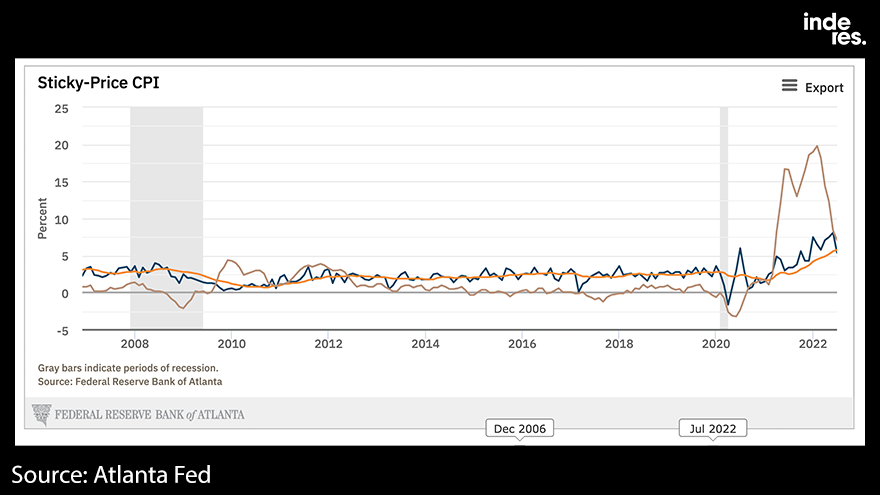 Europe's inflation is being whipped up by energy prices, but natural gas prices have recently shown signs of easing. Gas prices are still around 8 times higher than normal for this time of year, and the European energy crisis is likely to continue for several years. It’s worth bearing in mind that if there is even a slight dip in demand in the energy market, prices can quickly collapse to lower levels. Now we have seen this effect in prices going sharply up due to a supply shock, but if demand falls the effect can be the opposite. 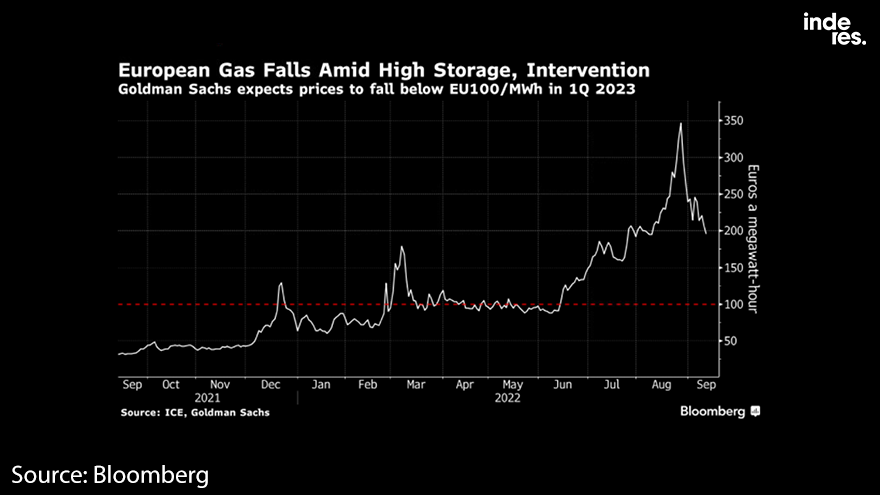 High inflation tends to be bouncy in nature, so falling prices can be a false alarm and a pointless cause for celebration. Therefore, even if inflation were to fall rapidly, I don't think it’s reasonable to expect central banks to pull a quick about-face on interest rates.

Rapid inflation has provoked a number of enemies. The most obvious of these is the oft-repeated worsening comparison period. Here is a visualization of the US consumer price index on a logarithmic scale, so that all the bounces look equally bad, and the annual change in the index. After such a sprint, it will be difficult to reach almost 10% inflation again next year as the rise builds on the previous one. For inflation to be sustainable, wages would also have to rise rapidly, which they don’t seem to be doing, at least not now. 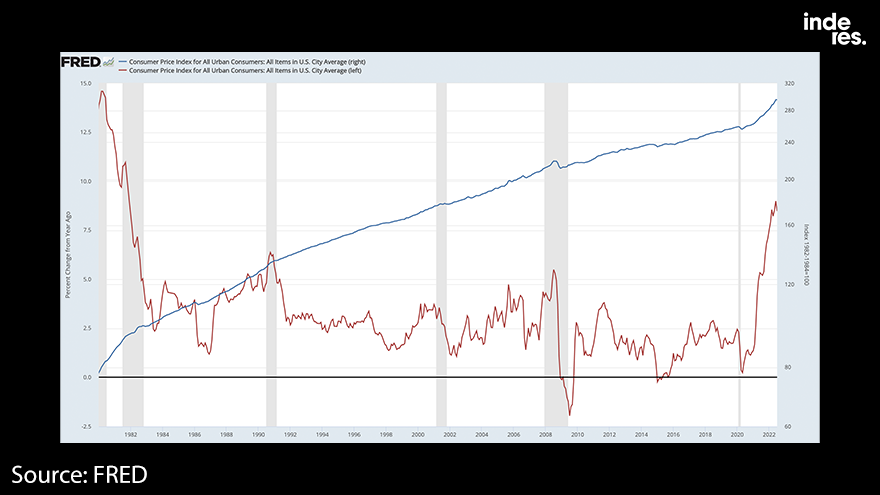 Raw materials, such as oil, no longer seem to be supporting the rise in prices. Au contraire, raw material prices have fallen sharply. Probably the least of the reasons for this is China's economic meltdown and the preference of its political elite for a zero-COVID policy, which is characterized by the lockdowns of major cities. Just look at the Bloomberg Commodity index. 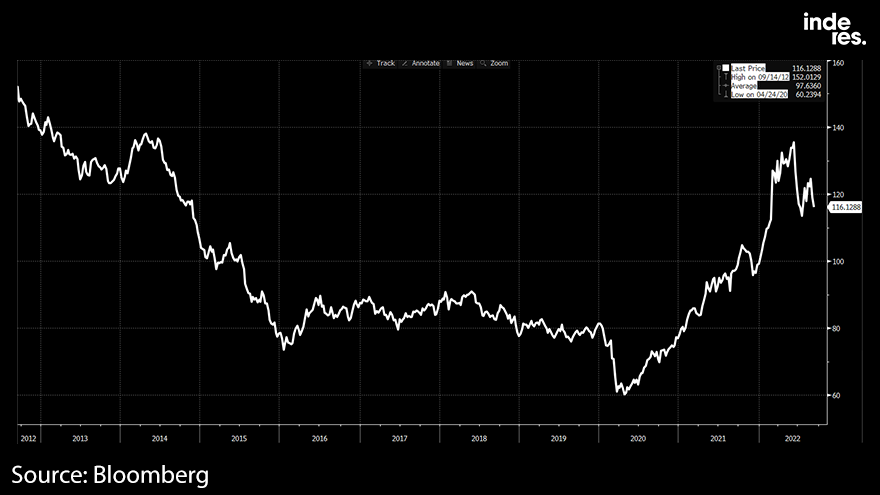 The price of copper, which is often considered the barometer of the economy, has fallen sharply at the peaks. It is still high compared to the price level in the 2000s, but inflation measures the change in the price level and if the prices of goods don't rise, inflation will calm down. I understand that the stock levels of many raw materials are also low, so you shouldn’t be counting your chickens before they hatch.

Oil prices have already fallen to levels before Russia's invasion of Ukraine in February. Oil prices fluctuate wildly, and the futures market is very thin in terms of liquidity, which makes it difficult to say anything about the prices. OPEC, the cartel organization of oil-producing countries, decided a while ago to cut production to support high prices. 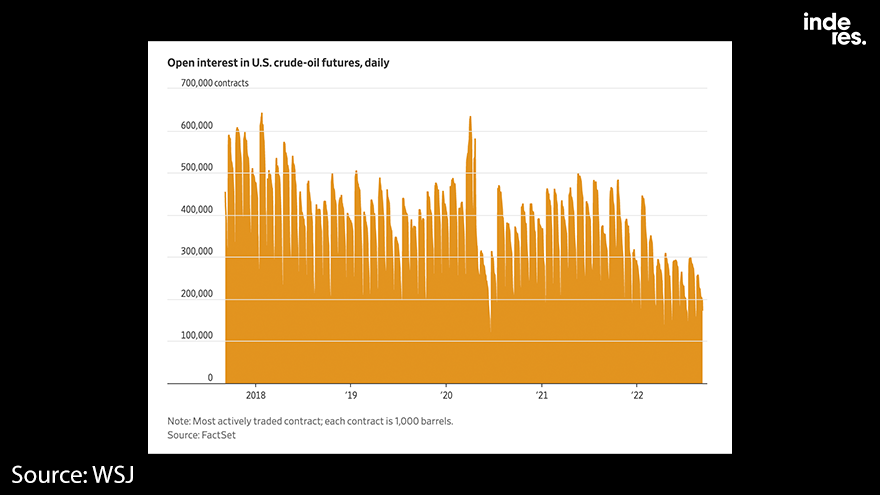 Oil prices are very sensitive to fluctuations in demand. There has been little investment in capacity in the oil sector in recent years, which supports prices. At the same time, oil is now a very attractive source of energy as natural gas prices in Europe go through the roof. After all, oil prices flatlining or taking a small dip will help cool inflation towards zero per cent.

The fall in the price of crude oil isn’t immediately visible at the pump because before it reaches the consumer you have to refine it, distribute it and tax it. In the US, the price of petrol at the pump has fallen sharply in recent weeks which has a big practical impact on society built on cars. 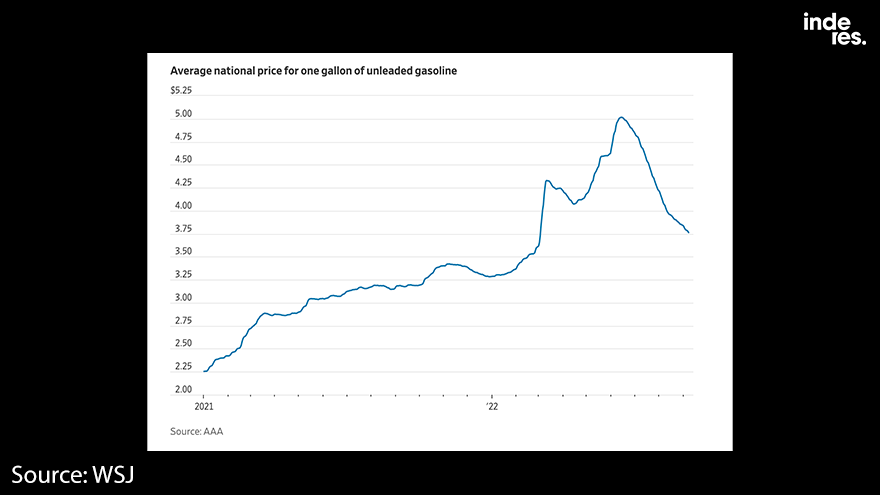 The Baltic Dry Index, which measures maritime freight rates for raw materials, has collapsed to levels seen before the COVID crisis. 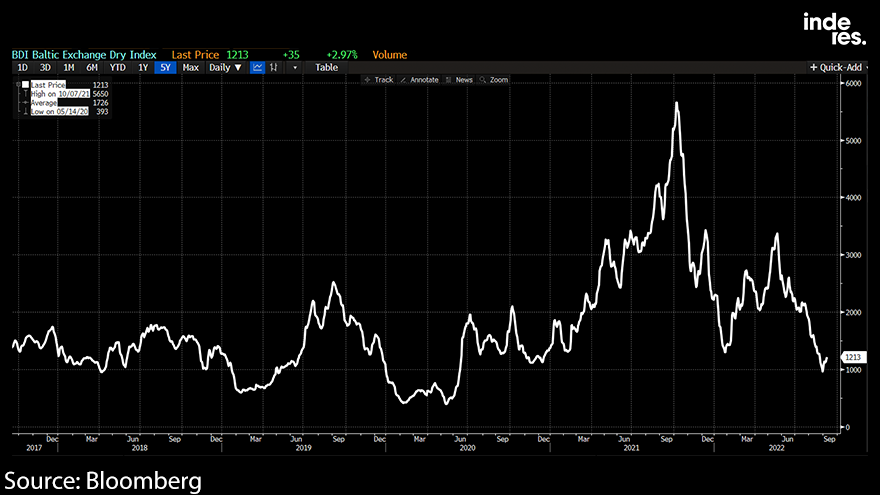 Used car prices in the US are tumbling and consumer expectations of inflation have also started to fall. 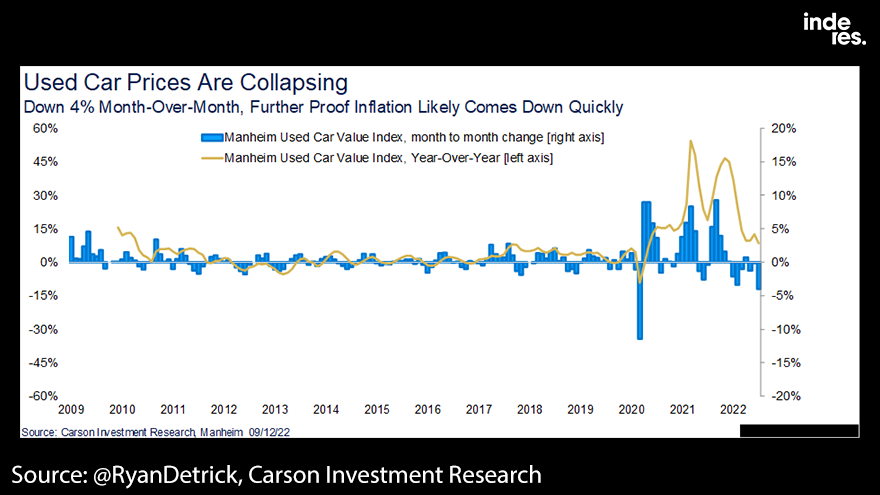 It would be positive if consumers weren’t psychologically driven to expect constantly skyrocketing prices. 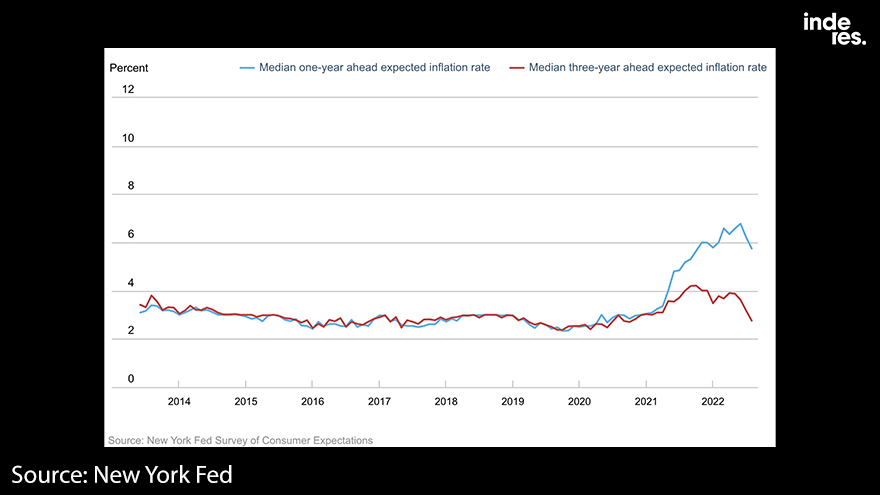 Investment legend Stanley Druckenmiller has said that the best way to create deflation is to inflate asset classes such as stocks and housing into a bubble. When the bubble bursts, there will be a real deflationary nuclear fallout in the economy (if you dare to use such metaphors in these sensitive times).

CrossBorder Capital's global liquidity meter currently indicates a decline. They count as liquidity the money floating in the system, but also potential credit. Therefore, it’s a broad measure of how much purchasing power is being extracted from the financial system through credit crunching. Global wealth growth has tended to follow liquidity quite obediently. In a way, this is logical, because it's hard for the price of shares, housing or gold to stay high if the money to buy them is going down the drain. 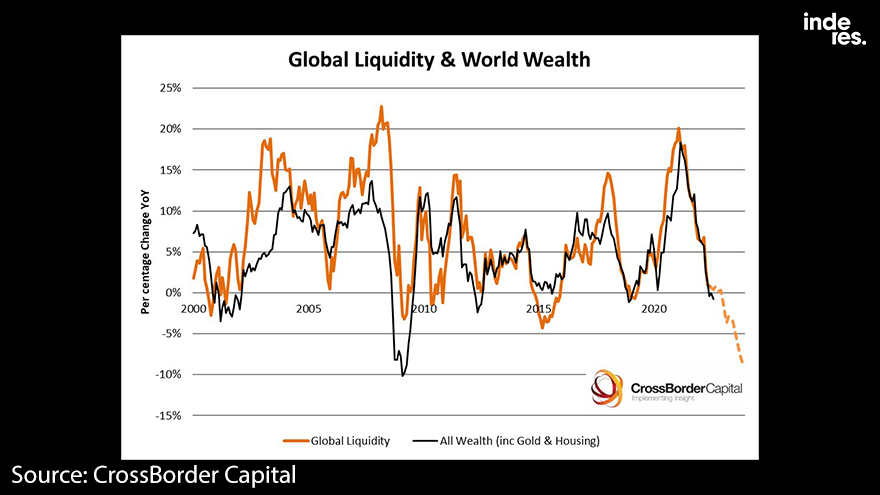 Referring to Druckenmiller's comment, asset classes collapsing would be deflationary. People feel less wealthy, and the collateral value of asset classes declines, reducing demand for goods and services in the real economy.

The guys in the interest rate market also think that inflation will soon die down. In the US, the five-year inflation expectation has eased to 2.5%, while the one-year expectation is hovering around 2%.

This is a fun graph. The bond market has seen an inverted yield curve, with short rates yielding better returns than long rates. This has usually preceded a recession. In recessions, prices also tend to calm down. 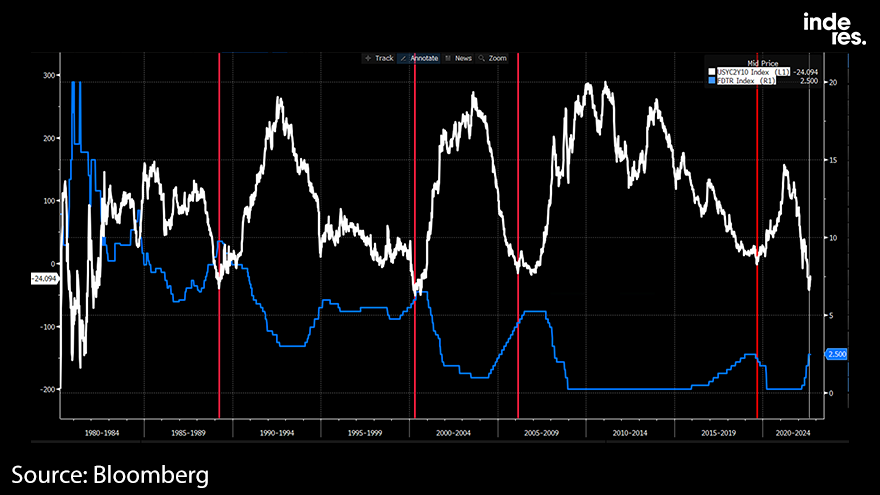 When the yield curve inverts, the Fed's Funds rate has usually peaked. If the bond market is right, the cooling of prices, at least in the US, could put the brakes on tightening the monetary conditions surprisingly quickly.

Finally, it is worth pointing out that an economic descent into deflation and recession isn’t necessarily very bullish for stocks. In recessions, earnings take a hit, the value of inventories falls, the real value of debt rises and, in the worst case, households and businesses are pushed into a spiral of cost-cutting. The spending of one is the income of another, so this leads to a shrinking economy. The difficult and volatile times for equities would therefore continue, even if inflation eases.

The difficult and volatile times for equities would therefore continue, even if inflation eases. Fortunately, long-term deflation has been a relatively rare phenomenon in the modern economy. At the same time, you would think the tables would turn within equities. As the interest rate outlook falls and economic growth slows, growth companies with cash flows far into the future look more attractive. In turn, raw material producers, which have been top performers this year, look less flattering. 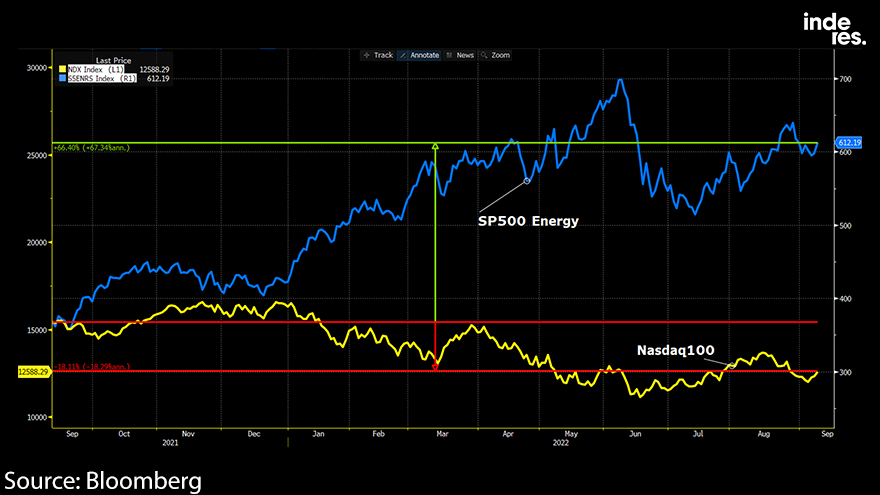 Thank you for reading the post. Read analysis and make good stock picks!